I think my favorite aspect of crafting a photograph is the composition. Something about perfecting the geometry—all the elements in a faithful order, or finding a very specific balance is supremely satisfying. It’s one of those odd visual things: You don’t really notice it if it’s done well.

This photograph was taken in a health care center in very remote area of Laos. Land Cruiser required for an NGO staff visit in the dry season, all but unreachable by vehicle in the wet. 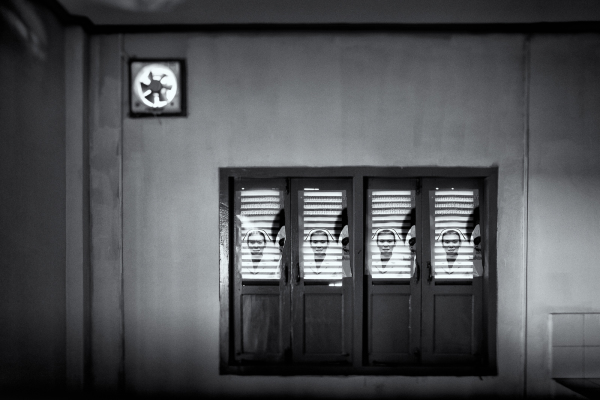 I like that you can draw an imaginary line from the upper left corner to the lower right and that line would cross a number of rectangles:

The structural components of the room itself, the fan and window frames, and the tiles on the sink. I also like the numerous vertical, horizontal, and parallel lines in the image, as if it is an image in a frame of itself.

But one of my favorite details is the fan. It appears to be moving. It was not; the day was dry and windless. I like how it is emitting faint patterns of light on the left wall and ceiling—I can imagine those patterns rippling like flames if the fan were turning.

There was furniture blocking the light coming in from the door to my left rear—hence the shadowy lower left corner. I could have moved the furniture to allow light into that corner of the room, but there was something about the darkness in the lower left that seemed to balance with the slightly less darkening in the upper right corner of the frame, so I left the furniture where it was.

Another detail I really enjoy is the repetition of the nurse. If you were to see the image blown up quite large (click on the image above to enlarge), you would see that the only real thing in focus in the entire image is a horizontal line that bisects her eyes in the many posters. I shot this with a Canon 24mm Tilt Shift lens fully tilted—as you move away vertically up and down in the image from that bisecting line, elements in the photo get further and further out of focus. I wanted peoples’ eyes to move all around the image and see the natural geometry, but to be always pulled by selective focus to the nurses’ eyes.

And an odd thing I’ve noticed now that I’m repeatedly looking at the larger version of the photo… maybe it is my imagination, but the nurses all appear to be expressing slightly different emotions. The posters are identical; I looked at them closely when I was in the room. Maybe it is just the play of light…

This photo is a part of a series I will be publishing later this year of Lao hospitals and health centers. They were taken when I was doing a project with Médecins Sans Frontières (Doctors Without Borders in the States) that shut down early and therefore these didn’t get published. You can see portraits of some of the staff I worked with here.

I haven’t decided on a title for the project yet, but I’ve been tossing around a few ideas, one is Views from the Infirmary. Stay tuned for the full gallery.