I’ve been in Xamtai, Laos, waiting on authorization from the local authorities to do a photo project with an international NGO working here. So, I’ve been keeping busy photographing the very cool bamboo water wheels that the Lao use to move water from river level to the farmland above. 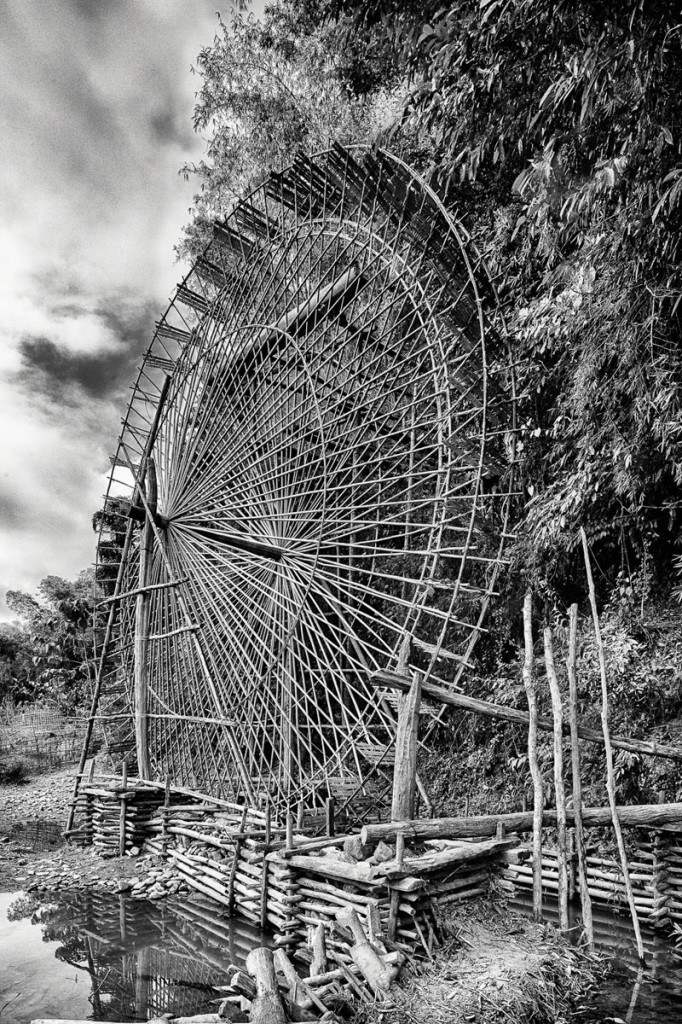 As I wandered down the river I noticed a bunch of Hmong busy on the other side of a large truck. As I came around the truck I was briefly taken back to the scene in Apocalypse Now where the camera is cutting back and forth between Willard killing Kurtz and the ritual slaughter of a water buffalo.

Of course this doesn’t look anything like the movie, but it was the closest thing to seeing a water buffalo slaughtered in SE Asia I’ve experienced. Odd what pops to mind when you come upon a scene in life that is so different to what you see in your native land. 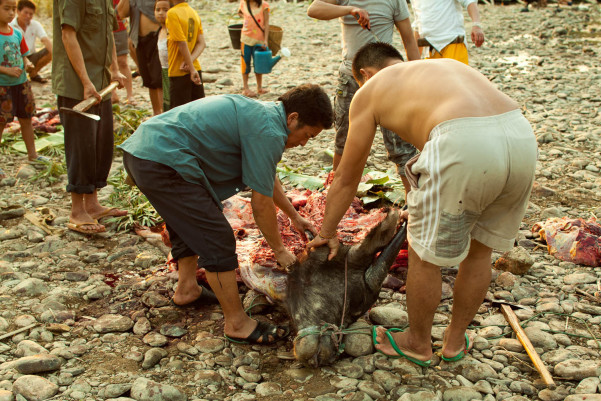 I think it was machetes In Apocalypse Now, but I’m guessing it was an ax this time. 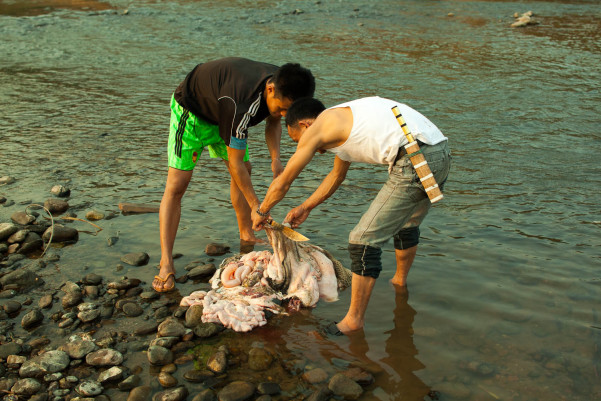 Yeah, guts. Click to enlarge if you really want to. 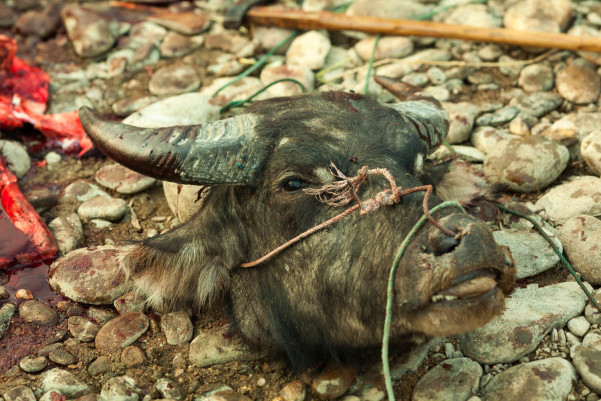 This boy was headed back to his home and was too shy for a photo, but with some help from a new friend I just met and hamming it up a bit he finally cracked a smile. Let me posit the obvious: kids here do not believe meat magically comes in a plastic-wrapped styrofoam package from the grocery store. 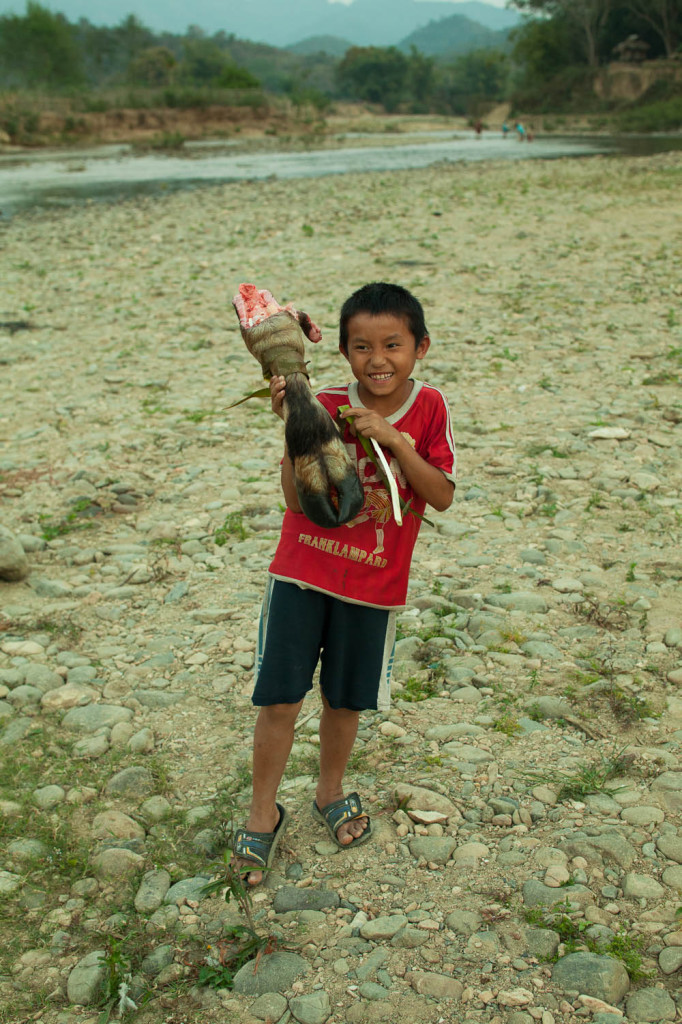 On the way home.

As I mentioned above I met a new friend. When I approached the crowd (and I barely know one word in Hmong) someone said “Hello! How are you?” in excellent English. That someone turned out to be a 17yo high schooler named Boun Mee Xay. His english was very limited, but what he did know, he knew how to pronounce very well. We chatted a bit and he mentioned that he had a garden on this small island in the river. Being an avid gardener, I suggested we cross the river and take a look. He showed me some squash plants, some things I didn’t recognize (and we didn’t know how to communicate the plant’s names), and these eggplant bushes. Eggplant is difficult to grow in the Pacific Northwest where I live because of the relatively low temperature and light levels. Not the case here. That’s the biggest eggplant plant I’ve ever seen. The eggplants were shaped and colored purple the same as the common eggplants in the USA. However, they were much smaller (and least at the point I saw them, maybe they grow much larger, I haven’t seen them in the market here). But this bush was just covered with them. 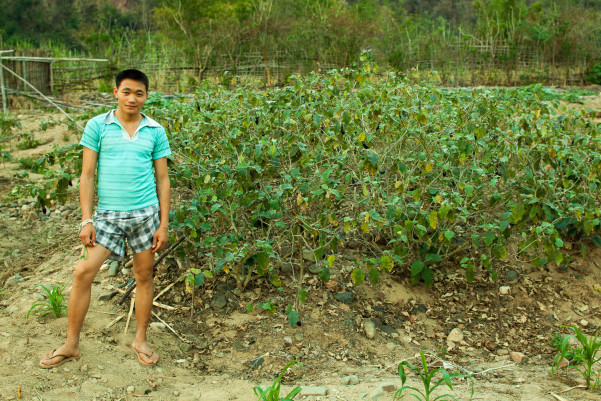 As with virtually all the Hmong and Lao people I’ve met, he was exceedingly gracious. He invited me back to his house to give me a motorcycle ride back to the guesthouse where I’m staying (which was great as I had about 40lbs of camera gear on my back). When in his house I met the family in this order: Grandfather, grandmother (shy, off to the side), father, mother, and brothers and sister. He then asked me if I wanted to stay for dinner, which I declined as I had to get back to meet friends. Then he offered me a share of their water buffalo meat! I declined that also as we don’t have a kitchen where we are staying. At that point we drank some Hmong tea and he pointed to the TV and told me it was a Hmong channel (Note to self: TV sucks in every country I’ve been in). I didn’t think it respectful to take photos, so there aren’t any of the inside of the house. I said my goodbyes and went out to get on the motorcycle. He started it and I got on and he stated in complete surprise “You are heavy!!” He’s about 5′ and probably weighs 110lbs soaking wet. I’m guessing he’s never had a live 240lb load on the back of his motorcycle. We headed off.

As we headed down the road, he said “Let’s go see my English teacher” and we whipped a u-turn and came to a stop before a wooden room with a very low light level (these pix below where shot at 12,800 ISO to get a barely acceptable shutter speed… it was much darker than it appears), some old desks, and one whiteboard. There I found his energetic English teacher and three of his friends getting tutoring after school. The teacher works all day at the school then puts in three more hours a night tutoring at this small room in town. He’s dedicated.

His teacher wasted exactly zero seconds putting this native English speaker to work. He wrote sentences (his English was near perfect—actually textbook perfect) and had me read them. Then the kids had to read a question and I would answer. Then I would read another set of questions and answers and they would repeat after me. I was there about a half an hour and with their turbo-teacher we covered a lot. I was peppered with many questions and would repeat them and then respond. I don’t know how their teacher keeps it up. He’s a dynamo.

I’m still amazed at the generosity and kindness of the peoples in Laos. Considering America’s dirty war, the use of the Hmong as the CIA’s proxy army (and then our abandonment of them and their repression at the hands of the Pathet Lao), and the fact that people are maimed or killed every week by unexploded ordnance (UXO; mostly anti-personnel cluster bombs) America dropped on them for ten years, I expected some hostility. It could be that they are too young to remember, that they don’t want to remember, or some other reason I can’t decipher.

But I’m very happy that I found these people. I it is so wonderful for me to discover cultures like this. This won’t be my only trip here.