This is a time-lapse of the cluster bomb display at the Cooperative Orthotic Prosthetic Enterprise (COPE) in Vientiane, Laos.


If you can’t see the video above, click here.

Below is a picture of half the Chronos Light time-lapse rig used to shoot the image sequence—there is another tripod below, securing the other end of the rail.

As I mentioned here, Circle Of Abstract Ritual by Jeff Frost is an amazing use of time-lapse photography. He’s released the video on Vimeo where it has already garnered the Staff Pick Award. Check it:

If you can’t see the video above, click here. 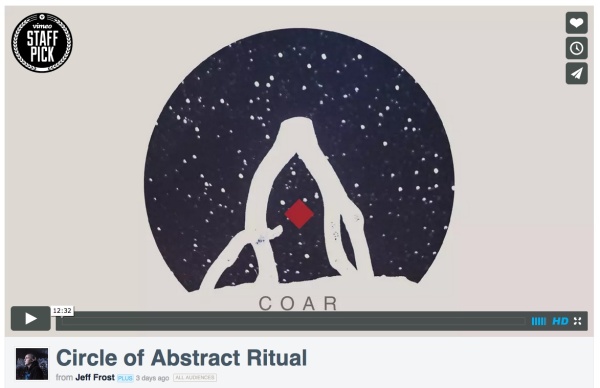 Circle of Abstract Ritual began as an exploration of the idea that creation and destruction might be the same thing. The destruction end of that thought began in earnest when riots broke out in my neighborhood in Anaheim, California, 2012. I immediately climbed onto my landlord’s roof without asking and began recording the unfolding events. The news agencies I contacted had no idea what to do with time lapse footage of riots, which was okay with me because I had been thinking about recontextualizing news as art for some time. After that I got the bug. I chased down wildfires, walked down storm drains on the L.A. River and found abandoned houses where I could set up elaborate optical illusion paintings. The illusion part of the paintings are not an end in themselves in my work. They’re an intimation of things we can’t physically detect; a way to get an ever so slight edge on the unknowable.

Early in the process I mapped out a very interconnected narrative structure. It took a long time to fill that narrative structure in, and when I finished editing the film after seven solid weeks of being holed up in a dark room I had no idea if it was something anyone would want to watch. I almost cut the film into pieces before realizing that outside influences were pressuring me to make that decision, and that I was happy with it as it was.

It took a long time to come to the creation side of the original premise. It finally took form in a collaboration with sculptor, Steve Shigley, as well as 15 amazing volunteers who moved full sized tree sculptures 450 times over two nights to create the stop motion climax of the film (see the behind the scenes film, Story of Abstract Ritual for the tale of their monumental effort:vimeo.com/frostjeff/soar).

The idea I wanted to explore was the creation of culture as a conscious creative act, but without the trappings of dogma from institutions or even from ways of thinking. The circle of inverted trees became a small piece of the world with personal meaning where I could mark significant events, contemplate and reflect. That circle still stands, and I still visit it regularly. Several people who have been there have told me that it’s come to mean something special for them as well. They each have their own fascinating way of interpreting the power inherent in those trees.

This film is art for the sake of art. It was made with much generosity, from the people who let me crash on their couches to the people who backed the Kickstarter to people who just wanted to pitch in: thank you. This would not have been possible without your help.

Every spare cent I make goes back into creating art. If you’d like to see me keep doing what I’m doing please consider purchasing a download or a print at jeff-frost.com, or PayPal me at jeff@jeff-frost.com

GEAR:
Dynamic Perception provided motion control gear for this project. They’re a great company run by an awesome dude (hi Jay!), and their product is rugged and reliable. Check them out at dynamicperception.com.

Some time ago I came across the work of Jeff Frost — part photographer, part videographer, part alchemist. Media and metaphysics—two of my favorites. Not long ago he had a Kickstarter campaign. He had me at:

It’s art for the sake of art.

END_OF_DOCUMENT_TOKEN_TO_BE_REPLACED

Disclaimer: The Chronos Project is a sponsor of the Plain of Jars Project.

Note: Some of the videos of prosthetic limbs homemade in the remote villages of Laos may be disturbing to some.

About eight months ago I added a great piece of gear to my kit, the Chronos Lite time-lapse system by the Chronos Project. The shipping company used the first shipping box as a piñata and caused more damage to the rail than I could even imagine. This was a few short weeks before I was to fly to Laos and the Chronos team built me a new rail in record time. Excellent customer support… Everything since has worked like a charm. Here is a quick video of one of the motion-control shots (mostly what I use the rail for) that I used for the the intro to many of the videos on the project. Following are other videos for the project that contain shots done with the rail. Finally, below, are snaps I took of setups.

The fundraiser for the Plain of Jars Project is on until Friday, May 16th, 6pm PDT. If you would like to support this crowd sourced fundraiser for a great community project in the, per capita, most bombed place on earth, please go here:

Here are other videos that use elements shot with the Lite kit: 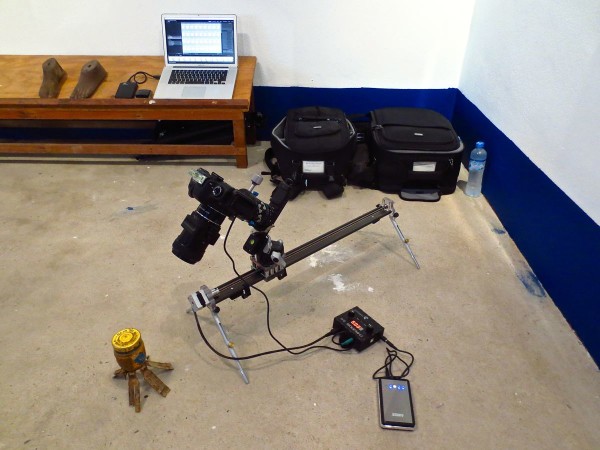 You Can’t See The Second Tripod Holding The Other End Of The Rail For This Vertical Up Shot.

My friend Bill Livingston, a somewhat cantankerous filmmaker, always manages to forward me some of the most beautiful examples of photography and cinematography. We got both in this piece by A Glimpse Into:

Here’s a link if the video isn’t visible above.

A nice addition to this short piece is the use of a time-lapse rail—and they’ve used it really well.

If you want so see some more beautifully executed eye-candy, take a look at A Glimpse Into‘s site here:

Also posted in Black and White Photography, No Words

MacBoot: A Great Little Tool That Does Just What It Should

I’ve finally taken time-lapse photography a little more seriously and recently had a good time shooting this in Bangkok. I got inspired by the design and people behind The Chronos Project. At one point I realized that the slower 32GB CF cards I’m using in my 5D MkII were a bottleneck (the Bangkok time-lapse is 600 raw photographs) that was causing the camera’s buffer not to empty as fast as necessary. So, I bought a much faster 64GB card, dragged my Magic Lantern files (including my ML preference file that is on each of my CF cards) to it, and poof, nothing.

Then I recalled something about formatting 64GB or larger cards in this manner. That’s when I recalled a little Java app called MacBoot. I love software like this. It’s small, fast, and does one thing exactly right. I’ve always been drawn to small, specialized pieces of software. And, over the last few years I’ve been making a concerted effort to donate to the people writing these types of apps. So, if you are using MacBoot or Magic Lantern, send the creators some cash. Small independent software creators need support to continue doing such great work.

My first Bangkok time-lapse! Actually, I’ve done a few time-lapse shots before, but this is my first time-lapse on a motion control rig from The Chronos Project. More about that piece of kit in a following post. There wasn’t anything close in the foreground, so you don’t get any parallax effect, but if you watch the sides of the frame, you will see that the camera was indeed moving. I letter boxed the 3:2 image because I liked the way the format looked for this shot. Here it is, but please change the Quality Setting (click on the little gear on the bottom right of the YouTube viewer) to 480P or higher. YouTube’s compression just destroys motion at anything below that.

Read on for the technical details… and maybe a peek at my setup, for the truly geeky:

END_OF_DOCUMENT_TOKEN_TO_BE_REPLACED

I’ve never before pledged any money on a Kickstarter project, but this is just too amazing:

Modern Ruin: Black Hole is the first half of the project, check this out:

END_OF_DOCUMENT_TOKEN_TO_BE_REPLACED

I’ve always been tempted to seriously delve into timelapse photography (Here is a wonderful example: Timelapse: Bevan Percival’s Stunning Lenticular Cloud Capture), but it has always been put on the back burner for one reason or another. Well, that’s changing. Part of that came about because I installed one of the greatest hacks and best pieces of software (firmware?) engineering into my Canon 5D MkII: the Magic Lantern Canon EOS Camera Tool. The people that did that hack (and I use that term with the most respect) made the camera, in my mind, about 100x more useful. Just a few of the tweaks I use: