So… technically, my Bangkok Personalities posts are about someone I find interesting and interact with. In this post, however, I found the situation interesting but the only interaction that happened was getting scowled at by an Indian holy man. And no, his name isn’t Bestu Varas… 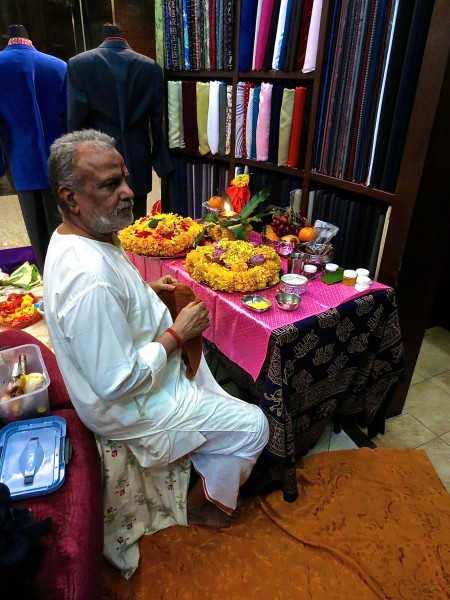 That was Laotian, I’m Hindu. What part of that don’t you get?

Let me back up… While traveling in Southeast Asia last year, I experienced something that many people in the West are not even aware of: every culture has its own New Year’s Day. While I was in Thailand and Laos, I experienced:

As I was doing some grocery shopping in Bangkok as I prepared to head back into Laos, my attention was caught by a colorful display in a tailor’s shop. One of the things I’ve discovered about traveling and exploring other cultures is that I’m getting pretty good at wandering right into situations that I would have previously just observed from the outside.

So, I barge right into the tailor shop and am greeted warmly by the owners, an older Indian couple. They then answer my inquiries about what’s going on: India’s New Year’s Day celebration. They invite me to participate which basically has me take off my shoes, stand near the holy man, and receive a sweet homemade snack. The holy man, however, seemed non-plussed at my very existence. Well, I’m not Hindu and I’m certainly not Indian, but I didn’t let that minor detail deter me. I think I may have accidentally greeted him in Laotian, so that didn’t make things any easier to decipher. Maybe he just doesn’t like being photographed, or just photographers spouting Laotian in his direction…

I wished the couple Happy New Year and took my groceries back to my hotel room. When I decided to write this post, I took a quick look online to find out more about India’s New Year’s (This is my second post about an Indian event in a few weeks, here is the first. Maybe this is a sign I need to go explore India?).

That’s when I discovered there isn’t one New Year’s Day in India. Or two. Or three. Four? No, there are fourteen. The one I experienced is called Bestu Varas. I wish I had known all this beforehand, as I could have wished the couple Nutan Varsha Abhinandan. Or written નૂતન વર્ષાભિનંદન, which is completely baffling to me, but looks cool.

The more I travel around the world the more I realize how little I actually know about it. And how much I look forward to learning more about it.

* I find one aspect about Laos’/Thailand’s Pii Mai (also called Songkran) fascinating: April 13th is the last day of the old year. April 15th is the first day of the new year. April 14th is the day of no day and isn’t part of either year. I don’t understand it, but for some reason a day unattached to either year is really appealing to me. I hope to find out more about it.