Tribute To FB, In Client’s Home

I really enjoy it when a client sends me a photo of my work hanging in their home—especially a home in which I have very fond memories.

The Photo Has Since Been Relocated Out Of Direct Sunlight

END_OF_DOCUMENT_TOKEN_TO_BE_REPLACED

I woke up the other morning to find an email from a good friend of mine, Nathaniel. He sent me a nice little surprise: an article on America’s National Public Radio (NPR) about the man, Manophet, that was the impetus for the creation of the school in Laos, The Lone Buffalo Foundation, where I volunteer.

The sad thing is in the main photo of Manophet: he’s climbing out of a bomb crater—and I knew exactly where he was. I had visited the same area last year for the Plain of Jars Project. It is an area called Ban Kai (ban=village).

I shot two short videos there, Visiting The Plain Of Scars Part #1 & #2:


While I was looking at the photo of Manophet, the first verse of Tom Waits’ song Hell Broke Luce popped into my head:

Buddha Tree In The Mist—Installed

This is the type of client email I love to get:

It’s a very satisfying feeling seeing my work hang in someone’s home—especially when the owner goes all the way and paints the wall and hangs a light fixture solely for my print.

It maybe be hard to tell, but this isn’t a small print… it is 22″ tall x 44″ wide. With the frame, it’s roughly 31″ x 55″ and quite heavy. The framer did an amazing job—I had not considered a black mat with a white bevel, but I quite like it. The organic pattern on the frame is a natural extension of the tree itself. A good frame job really emphasizes the artwork and also makes it look better—all without drawing attention to itself. This is a really well thought out example of that.

This is one of the images from my Plain of Jars series. Click the image below for a large view:

Buddha Tree In The Mist, Plain of Jars, Laos

Welcome To Laos: Me, Myself, And A Few Cluster Bomb Casings

I’ve just arrived in Phonsavan, Laos, a small city on the Plain of Jars. I had gotten my bags out of the minivan and got set up in my guesthouse of choice, the Nam Chai. I decided to wander a bit, which, in the afternoons, usually takes me to the Hmong food market. I grabbed my camera and my audio recorder and set off.

I hadn’t even gone 45 paces (yes, I went back and counted them, I’m odd like that) and came across a pile of American cluster bomb casings, courtesy of my country during the Secret War from 1964-1973.

Me, My Shadow, And Some Cluster Bomb Casings

Even with three trips to Laos now under my belt, I’m still surprised at my reaction when I come across the staggering amount of war detritus—much of it Unexploded Ordnance (UXO)—that remains in this country. A country with roughly the same land area as the US State of Utah.*

As an old friend might say You can’t swing a dead cat without hitting UXO in Laos. Of course, you would be wise to, one, not swing things at UXO if you wish to live a long and fruitful life, and, two, leave dead cats alone.

Welcome To Laos: Me, Myself, And A Few Cluster Bomb Casings

Buddha Tree In The Mist Published In PanoBook 2014!

I’m very proud to announce that a panoramic photo I shot in Laos earlier this year, Buddha Tree In The Mist, was one of the 150 panoramas selected out of 1677 submissions for publication in Kolor’s Panobook 2014.

Buddha Tree In The Mist

This panorama was shot as part of my upcoming series The Plain Of Jars. It was also the reward for $1000 donors on my Plain Of Jars Project crowdsource fundraiser on StartSomeGood for a small school in Phonsavan, Laos, called the Lone Buffalo Foundation.

END_OF_DOCUMENT_TOKEN_TO_BE_REPLACED

RIP: Fred Branfman, And An Image In Your Name

I’ve been thinking a lot the last few days. Fred Branfman, a person who I consider a true American hero (and I do not use the term hero often—sadly it has become watered down from overuse—and misuse), passed away last week. And, in addition to the sadness I felt, I felt a pang of guilt. Fred and I had been corresponding ever since I got involved in Laos and discovered the horror—and the millions of still-deadly bombs littering the landscape—caused by America’s “Secret War” there. I think Fred was the first American civilian that discovered the brutal campaign we were waging—and I think he carried that unimaginable weight on his shoulders his whole life. This article When Chomsky Wept (and this obituary, will give you some insight into Fred).

That is why I wanted to have Fred as an endorser for my fundraising project The Plain Of Jars Project (POJP) for the Lone Buffalo Foundation. After reading the book of stories by the terrorized villagers Fred interviewed, Voices from the Plain of Jars: Life under an Air War, I knew this man could give me insight that I could not hope to gather on my own.

Fred Branfman From The Front Page Of The POJP Website

Now, Fred was not a person to send you an email comprised of one sentence—he wanted to know everything about what you were doing, why you were doing it, and how it was going. I have an email in my inbox from Fred and it is labeled “draft” as I had not finished it, supposedly to do more important things. Here is what Fred asked:

I am very interested, if you have time, to learn more about what life is like on the PdJ, the life of the people, the degree to which the government cares about the people, specifics on the LBF (Lone Buffalo Foundation), etc. And YOU—how are you doing?

Now the guilt: One day I was at Site 1 of the Plain Of Jars and I saw an amazing view with the sun breaking through the clouds over the jar site below. I took one look and knew that this was an image I was taking for Fred. I sent him the image and he loved it.

And I didn’t. I didn’t because other things got in the way—things in hindsight that I can’t even remember; things that weren’t important at all. I can’t tell him, show him, because now it is too late. And I’m sad that I couldn’t pay back, in the tiniest way possible, the inspiration I got from Fred.

Thank you Fred. Here is your photo, RIP:

Laos Kids Are So Cool!

Laos Kids Are So Cool! This video was created by a couple of the kids at the Lone Buffalo Foundation in Phonsavan, Laos. I worked for six months there teaching a media workshop for the kids and running a successful crowd sourced fundraiser at Start Some Good. It’s really amazing what a couple of kids with an aging FlipCam, Windows MovieMaker, and a ten year old PC can do… This made me very happy!

Reward Photos And Products For Plain Of Jars Project Donors

Here are the donor rewards for the Plain of Jars Project fundraiser: first, the black and white photographs that I shot on the Plain of Jars in Xieng Khouang Province, Laos. Second, are Lao Silk Cards made by local women who work in the province. Third, there are two items from the Quality of Life Association, which has a network of villages affected by Unexploded Ordnance. These villages produce items such as the smartphone-sized bag and the iPad/Tablet bag. Please donate below to get one of these great gifts!

Buddha Tree In The Mist

Storm Over The Kings Cup 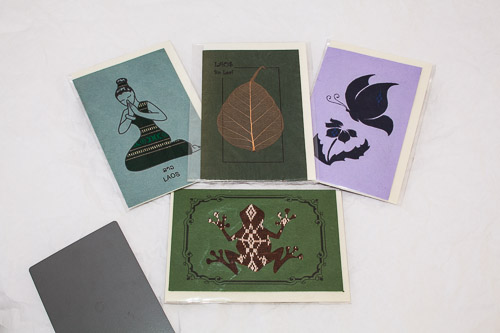 Today is it! The last day of the campaign is here… help us raise $12,000 at StartSomeGood and 120 new students will be educated at Lone Buffalo!!

Getting closer… $10,000 at StartSomeGood and 100 new students supported at Lone Buffalo!!